When a baby is born with severe deformities of the kind later identified as caused by the drug thalidomide, the midwives find it difficult to handle the situation, and the baby’s father rejects her completely, to his wife’s dismay. Trixie’s new sideline as a keep fit instructor brings her into conflict with Sister Julienne, and she also becomes suspicious of the relationship between Barbara and Tom. Rather than return to Wales as her mother wishes, Delia moves into Nonnatus House. 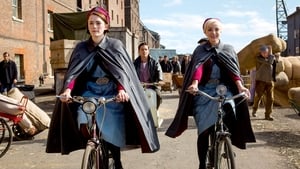